Hotel Lumiere Kasai is in the neighborhood of Tokyo Disneyland It is business hotel of Edogawa-ku, Tokyo

It is business hotel of Edogawa-ku, Tokyo. Access to various landmarks such as Tokyo Disney Resort® and Tokyo Sky Tree® is convenient.

Tourist information around the hotel 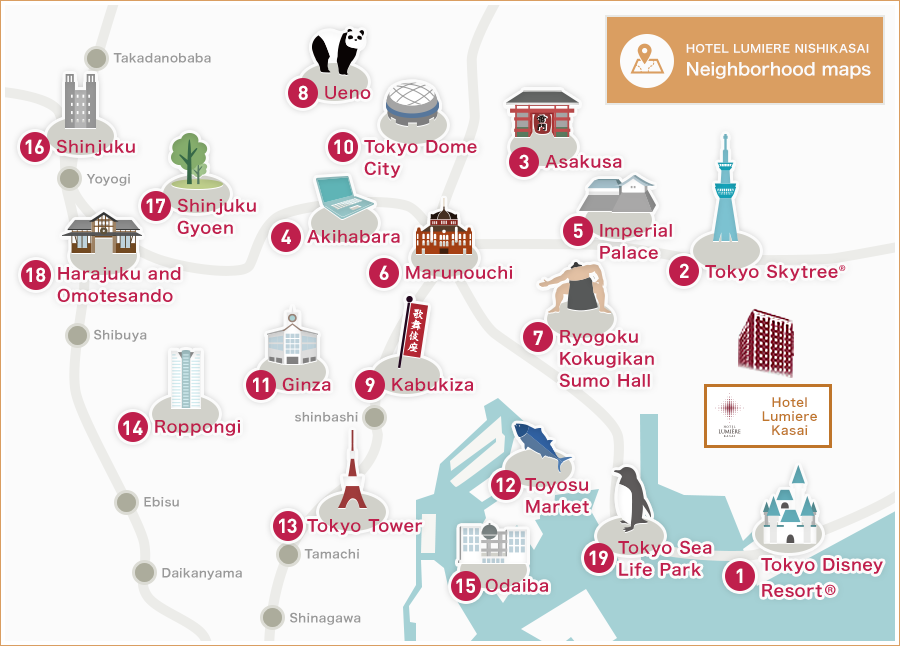 Tokyo Skytree, with a height in the world's of 634 meters, is the tallest self-standing communications tower. Tokyo Solamachi®, the neighboring commercial complex, is home to more than 300 shops and restaurants including a planetarium and an aquarium.

Asakusa is home to the Kaminari-mon gate with its huge red lantern, and Senso-ji temple. Visitors to Asakusa can enjoy shopping in the many shopping streets including Nakamise, and visiting sightseeing spots in a rickshaw.

Akihabara is famous worldwide as an electronics mecca. Hundreds of electronics shops, ranging from tiny stalls specializing in a particular electronic component to large electronics retailers, line the main street and the side streets around Akihabara.
There are dozens of stores specializing in anime, comics, idol-related products and other collectables, and maid cafes. Fans of Japanese anime and comics who visit from around the world are fascinated by Akihabara's charm.

The Imperial Palace grounds incorporates Gosho, the private house of the Emperor and Empress, palaces in which various ceremonies are held, government buildings related to the Imperial Household Agency, Momijiyama Imperial Cocoonery, and the East Gardens including the Tokagakudo Concert Hall.

Ryogoku is known as the heartland of sumo, and sumo wrestlers wearing yukata, or summer cotton kimono, are common sight in the neighborhood and around the train station.Many Chanko-nabe restaurants where you can enjoy the staple food of sumo wrestlers are in this area.

There are many interesting places in Ueno, including cultural facilities such as the National Museum of Western Art, the Tokyo National Museum, Ueno Zoo where you can see giant pandas, the colorful and lively Ameyoko Shopping Street, a wholesale jewelry district.

The Kabukiza Theater was rebuilt and reopened in April 2013.
The theater complex, GINZA KABUKIZA, includes an adjacent office building called Kabukiza Tower where you can visit the Kabukiza Gallery and a range of souvenir shops. You can fully enjoy the world of Kabuki even without visiting the theater.

Tokyo Dome City is an extensive entertainment complex consisting of the Tokyo Dome baseball stadium, an amusement park, the LaQua spa, shops, restaurants, and Tokyo Dome Hotel. You can enjoy a wide range of attractions all day long.

Ginza is one of the most renowned shopping areas in the world. Ginza is a fascinating place where the latest trends and the oldest traditions meet. The area is home to prestige department stores, world-class designer boutiques, and well-established stores where you can enjoy shopping for items from all around the world.

Toyosu Market. Opened in October 2018, the market has a designated tour route that allows you to enjoy it from a variety of angles. In addition to shopping for produce such as fresh fish, fruit, and vegetables, you can try some delicious fresh food at an on-site restaurant.

Visitors can ascend to the main observatory at 150 meters, the special observatory at 250 meters,get a bird's eye view of Tokyo. The Tokyo Tower complex features an aquarium, cafes, restaurants and souvenir shops.

The large-scale complexes in the area such as Roppongi Hills and Tokyo Midtown allow visitors to enjoy fine shopping and dining,all day long.
Roppongi also has another side – an art district comprising an number of cultural facilities such as the Mori Art Museum and the National Art Center, Tokyo. next to Roppongi is the Azabujuban Shotengai shopping street, a thoroughfare filled with shops and restaurants.

The area that opens onto the waterfront is popular with families.
Take a ride on the monorail and water buses for a totally different transport experience and to experience the sea breeze on Tokyo Bay.
Odaiba offers visitors entertainment, gourmet food, and a wide range of shopping experiences.

JR Shinjuku Station is the busiest train station in Japan in terms of passenger throughput.The area around the station's East exit is full of bustling streets such as Kabuki-cho and Golden-gai, shopping areas, department stores and other large retailers.
Alternatively, the area around the West exit is home to high-rise office buildings, hotels, and a public art facilities.
For those who are looking for a pleasant place to walk, the terraces among the buildings outside the South exit are the perfect place to stroll.

Harajuku is a hotbed of culture among young Japanese and offers visitors a wide range of stylish, trendy fashion products.
Takeshita-dori street is jam-packed with stores selling a wide range of fashion and food items, accessories, and clothes, and is constantly crowded with shoppers Just a short walk away is the more sophisticated area of Omotesando. This stylish zelkova tree-lined street is home to many artistic fashion buildings and galleries and boasts shopping, gourmet food, and art.

The aquarium is home to more than 600 species of marine life from around the world, including penguins swimming around the largest ring-shaped tank in Japan. The adjacent Kasai Rinkai Park features the largest ferris wheel in Japan.